A few weeks ago I received an email from my friend H. She and her husband are having a NYE party at their house but it's going to be themed. They want to have, as she puts it, "a dapper party". We are encouraged to dress from the mid to late 1960's (a la Mad Men - a show I have never watched). I'm not one to shirk theme parties or the fun of dressing up so I've decided to go Brigitte Bardot inspired. The 1960's weren't really a time for long hair with a few exceptions very late in the decade and I don't quite feel like dressing like a hippie. I assumed by "dapper" they meant cocktail attire so a few trips to the thrift store and I came away with a short gold & silver sequined cocktail dress, gold & clear kitten type heels and a gold purse (this is more shopping then I've probably ever done in my life for an "outfit"). I was able to attain a very close approximation to what I saw me wearing in my head so that was a very good thing. 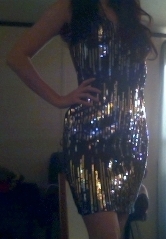 I never do much with my hair so I actually had to search how to style a messy yet glamorous looking 'do as well as 1960's make-up tips. It is now 12:40pm and I am beginning what is going to take me several hours to do since curling my thick hair takes forever and I want the curls to be sort of wilted and wavy in time for the party - where's my bump-it when I need one?

I'm looking forward to the party and seeing some friends whom I haven't hung out with in a while.
Posted by: Cherry at December 31, 2011 No comments:

Tags: Pictures, Who is Cherry

I am now the proud owner of that 1987 Camper Van it was named Hootie when I bought it and thus it will stay named Hootie.

Big thanks to AJ from cheaprvliving.com for making a couple phone calls and speeding up what has been a 6 week purchase process. To George for also attempting to call and for going with me several times to look at it and to Silver for taking me to get it tonight, helping me back it into my driveway without taking out my or my neighbors house and for running me to the grocery store since I really don't have a legal daily driver until the van gets registered.
Posted by: Cherry at December 19, 2011 No comments:

Dreaming of Mutant Caterpillars in My Skin

Had the worst dream just before I woke up this morning. It was extremely disjointed and didn't last very long. Gobie had some sort of wound on the back of his left leg. It looked like his skin was split down the back of his leg. Then the dream jumped to the front of my left leg with the same sort of split and to the upper part of the back of my calf where it looked like the skin was peeling off in a big square. I had some faceless female look at it and she started pulling these large white caterpillars out of my skin. They were holding on with pinchers on their butts. Chick says she doesn't want to mess withthe wound on the front of my leg because they were still in the "egg phase" and that's when I woke up.

Saturday Morning In The Trailer Park

8:30am - Take out trash
9am - Call police because my idiot neighbors are standing outside in 33 degree weather in bath robes or no clothes playing tug-o-war with a 5 month old baby in a car seat.

"Adam" seems kooked out of his mind on something.

Ok this is 40 minutes later. "Adam" is hopped up on PCP and had to be tazed. There are no less than 8 police cars outside of my house. "Adam" is gone in an ambulance but the police are still here deciding whether to take the children's mother. The folks who own the house next door are "Adam's" parents and they also called the police.

For the second time dude has stood me up about the camper van. I'm extremely annoyed.
Posted by: Cherry at December 04, 2011 No comments:

Tags: Buying a Vehicle, Who is Cherry

Just Another Day In The Trailer Park

I've lived in a mobile home for almost 6 years now. When I first moved here the neighborhood was nice - quiet, well maintained homes. I had elderly folks on either side of me which worked for me since I was on night shift and needed to sleep during the day. My biggest complaint was the noisy scrap business in the neighborhood behind the park.

Two years ago my elderly neighbor to the left either died or moved (I don't know which) and a younger group moved in. Within a month I had the sheriffs department beating on my door asking me if I've seen "Adam"

As an aside here. I keep to myself and don't really speak to my neighbors. Being on night shift I never really got to know any of them aside from a hello here and there so I had no idea who "Adam" was.

Adam apparently had a warrant out for his arrest and not only did I have to deal with the police beating on MY door to ask about him but I would have to hear them beating on the neighbor's door at all times of the day and night. At one point the property management asked me to call them if I saw "Adam" in the neighborhood because he was banned. Banned from a trailer park? That's got to be hard to do.

Recently "Adam" has been back next door. It's been a while so I assumed whatever he was wanted for and whatever issues the property management had with him was cleared up. That's when the screaming started.

Now that I am not on night shift anymore and since losing my job I am home all the time. On a daily basis this kid is pacing up and down the street screaming into his cell phone. Yelling obscenities with no thought whatsoever that he's in front of other people's houses and yelling. Trailers aren't well-made. My walls are just barely thicker than a door- so about two inches or so. I can hear everything that goes on in the street, in my neighbors yard and, when the windows are open, everything that goes on in their house. I've stepped outside a few times and told him to go yell in front of his own home or stop yelling all together.

They let their kids play in my driveway (two summers ago they set up an itty-bitty kiddy pool IN my driveway for their kids to play in.) They park in my driveway if I leave room (without asking) Far be it from me to sling around derogatory terms but these folks epitomize white trash if ever anyone does.

This past Wednesday I had their car towed out of my driveway. I've tried to be nice since I had to live next door to them (for now) but I've been pushed past my limits.

About an hour ago I could hear loud talking outside and looked to see the woman, her two children and some guy sitting at their picnic table. 15 minutes later there's screaming - I expect to look out and see "Adam" yelling at his girl in typical fashion but instead there's a group of 6 people standing in front of my truck IN my driveway threatening to shoot and stab each other. I opened the door and yelled at them to get out of my yard and away from my house - this didn't work. They simply moved to IN FRONT of my house to continue threatening each other so I called the police.

The officer could barely hear me over the people screaming and the one boy was still sitting at the picnic table and asked if I was calling the cops. "Yes I am." So now the chick is pissed at me and while I'm on the phone she starts berating me, "You're getting ready to lose your house, you [sic] about to feel that. I don't have no place to take my babies. I got two kids who don't have anywhere to go so thanks for that"

The police came out and by that time everyone had, of course, scattered once they heard I called the cops. I met them outside and told them where everyone had walked off to and came back inside. Now I just need to concern myself with retaliation either in property damage or by this chick trying to fight with me (which she will lose) so now I'm off to purchase a locking gas cap since I'm all but pretty sure these assholes siphoned the gas out of my truck once already.
Posted by: Cherry at December 03, 2011 No comments:

Or plasmacytic pododermatitis (Also called Mushy Pad Syndrome/ Disease). Just noticed that one of my cats has this going on with both of her front paw pads. She's not an overly cuddly kitty so it could have been there for quite some time. It doesn't seem to be causing her pain and they aren't ulcerated or bleeding so I'm not going to worry so much. The apparent tie between that and FiV has me somewhat concerned but it's a little late for that now with 6 indoor cats. I'll just have to keep an eye on it and I suppose if it ulcerates I'll start treating with doxycycline (which I have and can safely compound down to a dosage for her) or steroids (hooray for that ginormous first aid kit I've created)

I'm wondering if she has a flea allergy or other allergin sensitivity since she'll sneeze profusely if I spray anything in the house like air freshener, perfume, carpet cleaner. Definitely something to consider as we move forward with van dwelling.


On the plus side my 20+ years as a veterinary technician just saved me a $200 veterinary visit just to find out what this is and how to treat it. It probably also saved her the stress of going to the vets, the pain of possible biopsy and medications she likely doesn't need!

Not To Count My Chickens And all That 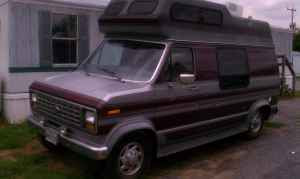 This may be my new home! I'm headed out to see it on Saturday. I already know the paint is worn - I'm ok with that. I know it's owned by a mechanic and I know he loves this van. I spoke to him a week or so ago about looking at it and he didn't show up so I wrote it off. Today I called just to see if it was still available and it turns out the guy was hoping I would call back about it for two reasons he said:

#1 Everyone who has called hm about it had intentions of turning it into an ice cream truck so he wouldn't sell to them.
#2 He said he'd probably be willing to take my 1998 Dodge Durango in partial trade because his daughter needs a vehicle.

I did disclose that the Durango has some issues which he didn't seem concerned about.

Has the world really decided to take its thumb off my forehead? I certainly hope so.

Now the question is how comfy will 6 cats, a mouse and myself be in this? I think we'll be ok since I have been working to prepare the cats for smaller space by moving us all into my 8 x 10 office in the house for the past 5 months. Oddly, the two who didn't get along well before moving into the small room are now best buddies who sleep together in one little cubby every night (when they aren't sleeping on top of me).

Today has been a good day. Let's hope Saturday is just as good!
Posted by: Cherry at December 01, 2011 No comments: