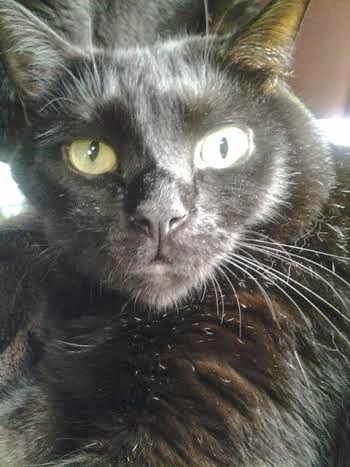 It is with a heavy heart that The Wayward Pussy Inn says goodbye to one of its crew. Gobie passed away here in the van on 4/25. He was surrounded by the other kitties and in my arms when he took his last breath. Gobie will be severely missed. He was my rolly polly, squidgy kitty. With his huge owl eyes (that didn't always point in the same direction) he always looked amazed at the life around him.
Gobie didn't have the easiest start to life. He was found in someone's backyard when he was about 7 weeks old, his tail was all but severed from his little body. The doctors assumed that a bird of prey attempted to make a meal of him because he also suffered head trauma, which is why his eyes didn't always point in the same direction. He tried to pass away several times during surgery to amputate the tail but thankfully survived. When he was old enough to be neutered he tried to pass away during that surgery as well as the surgery to close a hole we found in his palate. I always called him my special kitty because he never had full kitten or cat qualities. He was content to sit in whatever spot you put him and was always grateful for a cuddle. He loved snuggling to sleep and had a terrific purr.
He also loved the other cats and they would often be found sleeping together. His silly, sweet and gentle soul will be greatly missed here at The Inn. I hope where ever he went someone is cuddling him.