Holy hoot! Last update in March and here it is August already. This year is both flying by and moving at a snails pace.

Here's a what I've been up to since my last update: 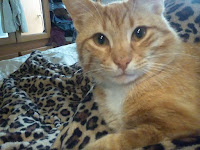