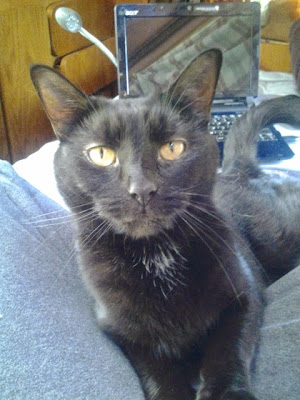 Cuda otherwise known as Barracuda, Little Lady, Little Miss Thing, Cudybug, and Cudapatooda left us on May 19. She was let go with as much grace and dignity as I could afford her. She was euthanized at 6:50pm. I just couldn't take seeing her suffer.

On May 18 she stopped purring. Cuda had the most wonderfully loud purr for such a dainty kitty. She also stopped responding to touch. These were signs to me that it was time to let her go.

Cuda came into my life 10 years ago. Someone at one of the hospitals I worked for found her abandoned under their porch and so I fostered and then fully adopted her. She was shy - VERY shy. So shy, in fact, that it took her nearly 5 years to allow me to pet her and even then I had to be laying down in bed before she would approach. In the past 5 years she grew to be a rather social kitty but still spent a lot of time in hiding. She loved to be patted on her butt with anything you could pat her with.

Gobie was one of her best freinds in the house and I have no doubt that his death caused her illness to spiral out of control. I think her depression in the three weeks he was gone just got the best of her as she completely stopped eating and started dropping weight at an incredible rate. She wouldn't drink either and so was extremely dehydrated.

Her presence will be missed by the remaining kitties and myself. She was buried next to her brother, Gobie, and I finally released the ashes of my first cat, Pike, on both of their graves since Cuda and Gobie were such sweet kitties and Pike was so fierce. Hopefully he is watching over both of these sweet little souls.
Posted by: Cherry at May 22, 2015