So I've been in Texas for about a week and a half now and I thought I would share my thoughts (go figure since this is my blog and all). Texas is nice - you can't ask for more from the weather in November. I just heard on the news yesterday that Houston is going to have one of the warmest winters on record - something you won't hear me complaining about. While the nights can be a little chilly, the days are fabulous. Most days have been in the 70s and there have even been a couple of 80 degree days!

We went to the Texas Renaissance Festival last Sunday. That place is huge - a little too big actually since I never got to see a fraction of what was going on.We took in the Mud Show, Wine and Alchemy, Tartanic and Randy even played a little with the Gypsy Dance Theater group.

Randy also purchased a new drum - a HUGE drum. It is now living in the passenger seat of The Rig. I can't wait to hear it incorporated into The Rogues sound.

I took some pictures but haven't had a chance to upload them yet so I'll try to get them posted early next week.

Today we're packing up to head to Galveston, TX and the Dickens On The Strand festival. The Rogues have some shows scheduled and it is going to be an absolute blast. It'll be so nice to head to a gig where I don't have to deal with folks I don't like and who, musically - in my opinion - suck. NO horrible singing to violate my ears, NO horrible out of time drum banging, NO god awful jokes, NO Elvis impersonations, NO nasty looks and snide comments, just awesome drums and amazing pipes and good people (although we will be missing two of my very favorite folks who are up in MD) - the way the band should be - in my humble opinion.

And now I'll step off my soap-box because I need to get to packing. Thankfully I don't have to take as much garb for this event as I would a renaissance festival. I put together a cute little Victorian outfit to wander around in. Hopefully we'll have a ton of pictures.

Before I go I will leave you with one picture that I took last night ... 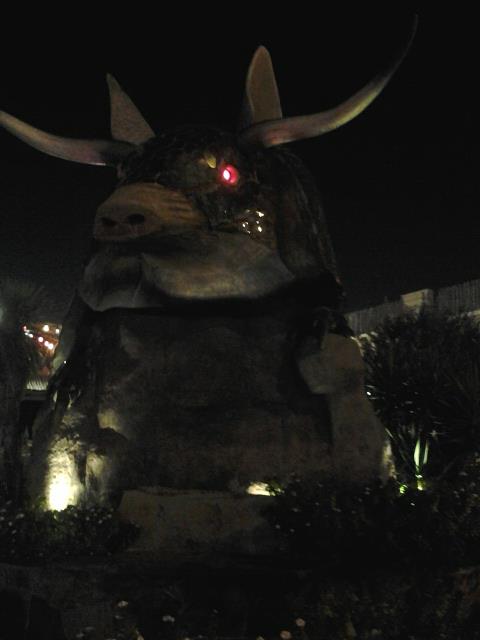 I took this because I was confused as to when armadillos started growing horns. This thing was on top of the joint next door to the BBQ place we had dinner at last night.
Posted by: Cherry at November 30, 2012

Tags: Ideal Living, The Rogues, Things To Do, Travel, Weather