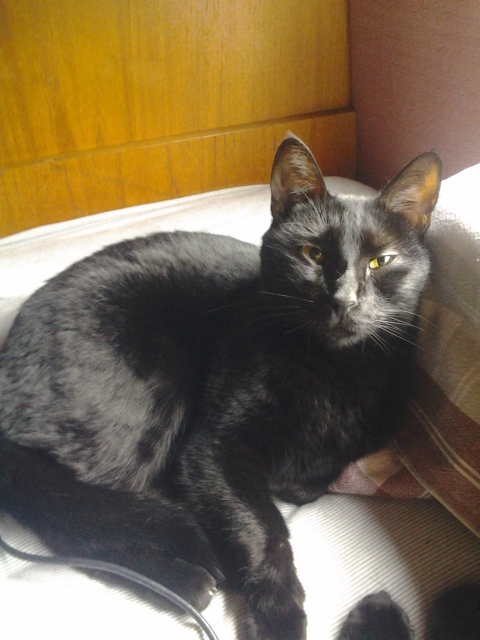 I knew it was bound to happen, it was just a matter of time. Yesterday while sitting at a rest area in Connecticut Dot squeezed out one of the small triangle windows. I looked up from texting on my phone to see her standing outside of the van on the driver's side door. As quickly and quietly as I could I got out of the van and walked around that side.

A note about Dot, she's my barely 5 pound, skittish little lady. She lives with me because she was too skittish to adopt out and she rarely comes to me unless I'm laying in bed. She's gotten better but it's not like she'll come running if I call her.

I was panicked. What the hell am I going to do? When she saw me she jumped off the van and ran towards the picnic tables (about 5 feet away from where I was parked). There was a crowd of folks standing in the lot stretching their legs who saw all of this and started heading my way to help round her up. I had to tell them that I was thankful that they wanted to help but that them coming near her would only chase her farther away since she won't even come to me and with that I got back in the van while keeping an eye on her to see where she was going to head. To my surprise she came back over to the van yowling and looking for a way to get back in the window she jumped out of.

I got back out and left the passenger door open (no small feat to leave a door open to get one cat in and keep 5 others from jumping out) and walked around the van hoping she would run from me and into the open door. Cat brains don't work like that - she knew how she got out and wouldn't accept any other way of getting back in. After three rounds of chase the cat where she and I did circles around the van I finally opened the drivers side door and tried one more time. Thankfully she decided to jump in and I ran over and shut the door to cheers from the crowd that was watching. I'm so glad she understands the van is "home" and didn't decide to take off into the woods.

She's actually been sort of clingy with me since the incident and I guess maybe she figures I ain't so bad compared to the loud trucks that were pulling into and out of the rest area!

*This post was edited on Aug. 5, 2020 for a racial microaggression. I learn every day.