Murf gifted me with a fabulous little battery charger. It's a Schumacher Electric XC10 - have to say I love this thing. 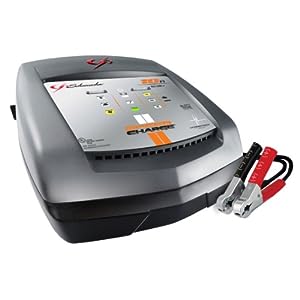 There are few things in life that scare me and only one thing I am absolutely terrified of - electricity and being shocked. When I was a kid I was tossed 5 feet across a room by a VCR because I touched the play button while my knee was pressed against the TV screen. My mother was electrocuted twice during her work for Westinghouse/ Northrop Grumman so I have good reason to fear the current.

Twice now my starter battery has died (the second time was my fault because I didn't fully charge the battery the first time due to rain) Unfortunately it seems (as I said before) that all of my overhead switches run off the starter battery and the isolator isn't stopping that for some reason - I don't know since I don't fully understand this van's electrical system yet. In any case - back to the battery charger ... this thing is so neat. It's smart enough to not let you hook it up wrong and the manual says it will charge my deep cycle battery in as little as 6.5 hours. When the battery is charged the machine goes into maintain mode which means it will drop from a 10 amp charge to a 2 amp charge automatically.