In part 1 of The Fuzz I showed you guys three of the Fuzz Squad (Gobie, Anchovy & Barracuda). This post is just about Dandy. 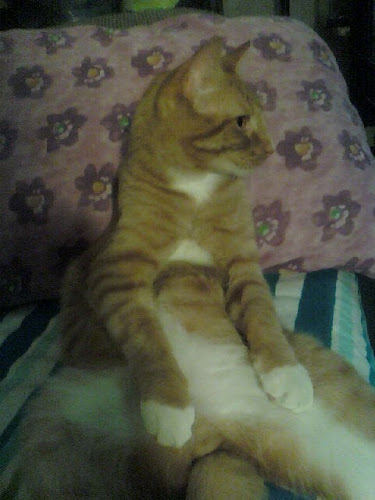 Dandy is a special guy. I've had him in my home since he was 4 weeks but he's been in my care since he was about a week old. He came into the veterinary hospital I worked at and into our kitten rescue program. Unfortunately the girl who was bottle feeding them tried to wean the litter far too early and I received a phone call asking me to come look at the kittens. When I got there this little guy was on the edge of death. His head was just rolling around on his little body, his color was bad and while I was holding him he stopped breathing - twice. After two rounds of CPR and a good warm bottle he perked up and I took him into my care to foster at home.

While Dandy (named for the fact that I kept telling him he would be "fine and dandy") was fostering at
my house I lost my oldest cat, Pike, to age and diabetes. it was decided then that this little guy would live with me permanently. One of the best decisions I've ever made. He is a definite light in my life. He makes me laugh multiple times daily with his human Al Bundy-like sitting posture. He loves to snuggle and is smart as can be. He gives high-fives, will jump into your arms if you pat your chest and will hold a conversation with you as long as you understand cat-speak (otherwise he gets bored and wanders off)

Watching him grow from a near-dead 5 ounce fluff ball into the 9 pound beast of love that he has become is one of my great joys in life. When people ask me why 6 cats - Dandy is the epitome of why. All of my little Fuzz Squad have a similar story and I can't imagine my life without them.