Wow, I didn't realize it's been so long since I've updated here.

One thing I've learned since I hit the road to live in the Inn full-time is that life's direction is mostly unexpected and that I'm really just along for the ride, floating where ever the tide pushes me and making the most of it as I go. The ability to adapt and survive is one of our best attributes as humans. In my short time on the road I've learned that life won't steer me wrong as long as I listen. Every day I'm amazed at the difference in my life from a year ago this time.

A year ago I was at the end of my rope. In and out of the hospital for stress and anxiety, fretting about where I was going to go and do since I knew the house was going to be taken. I knew I would survive but the real question was would I be any better? Any happier? The answer is, of course, yes on both counts.

These days my life is bizarrely different. I'm happier, less stressed, sleeping better, eating better and generally more positive. With those kinds of changes come other changes as well, other people can see those differences and while your true friends will be happy for you, there are a lot of people out there who will begrudge you your happiness.

I've thought deeply about how much I want to say in this blog about where my life is right now. That is the problem with not being so anonymous. There are often a lot of things I could say but shouldn't. That sort of bothers me since I live my life in a very open sort of way. I am not used to having to place a filter over what I say or do and I'm not very good at it.

In any case, after thinking about it I've decided I can just be as open here as I would be if someone were to ask me in person. Plus, I'm happy so I sort of want to shout that from the rooftops.

A friend posted this image on Facebook this morning and I don't think a truer statement has ever been made. Please check out the Homestead Survival Blog if you haven't, they post some incredible recipes, quotes and homesteading tips. 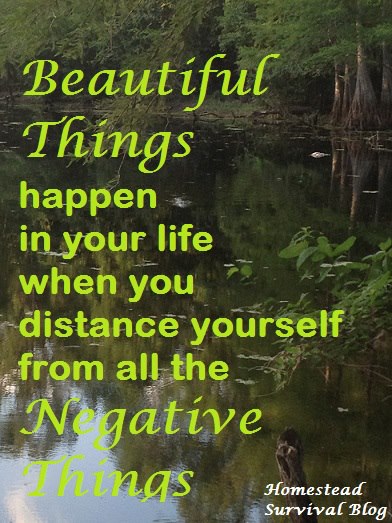 So true. I released my stress, started living my life on my terms and am learning to ride the ebb and flow of life's direction. In doing that I opened a part of myself that has been closed for a long, long time and into my life popped a wonderful person. I'll be honest, I tried to pass it off as me well, just being off. The last year has been so off I haven't been able to distinguish if my emotions are true or a product of some unconscious anxiety. So I did, I ignored it but the pull was consistent enough, the smiles and laughter felt good, genuine and easy - so I went with it and it's working.

Suffice to say that after a lot of years of avoiding relationships I'm finally finding myself in one. =) He also full-times on the road so understands the challenges. He also digs cats so there ya go.

Some of my friends are surprised by this news since I've always referred to myself as "terminally single" but so far every one of my friends has been happy for me. I wish I could say the same about his. It's unfortunate when people make assumptions, listen to and pass on untrue gossip and are generally miserable merely because someone else is happy. I feel very sorry for people who live their lives like that. But that's enough said about that. The positive greatly outweighs the negatives so we will continue to be happy.

Life has not been so pleasant over the past couple of years so I'm hoping the winds have changed direction and my little raft is now flowing towards peaceful lands. ;)

Until next time and, as always, telling the truth as I know it ....