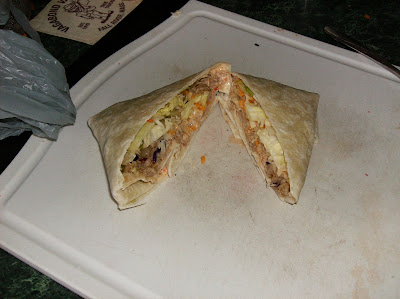 That's what we're having for dinner tonight. I was originally going to use this recipe but realized that I didn't have a couple of the ingredients they called for so I made up my own out of stuff I found in Dave's pantry. So my recipe is as follows:

2 quartered chicken pieces - I'm using two quartered legs and thighs. I left the skin on for the cooking to add extra chicken flavor. The skin will be removed!

1 small can of green chiles

Salt and pepper to taste.

All of this went into the slow cooker and will cook for the next 5 hours or so. When it's done remove the skin and throw it away and then pull the chicken apart with a fork.

It smelled good so let's hope it tastes good. Will update later with the results.

Update - It was pretty darned tasty on a tortilla with some lettuce, cheese and spicy ranch dressing.
Posted by: Cherry at July 31, 2012