The weather here in Maine has finally stopped being wet! We had another day of rain early in the week which showed the van was still leaking. Turns out it wasn't the vent this time but the old TV antenna fin. Dave was kind enough to pull it off and reseal it so hopefully leaking is a thing of the past. To be on the safe side we're going to reseal EVERYTHING that's poking out of the roof.

My friend Nate sent me these awesome screen doors for the side barn doors of the van. This will be so handy in keeping the cats in while allowing fresh air flow so I won't have to run the A/C so much since the new vent fan does wonders in keeping air moving.

Also got a new plug port since the old one had fallen apart and wasn't containing my plug at all anymore. Also learned when I got here that my van has a built in cord that pulls out. I never tried tugging on it since the van came with an extension - I just figured that's what I was supposed to use until Dave went to plug me in by pulling on the plug. There was a sharp moment of panic in me that went all slo-mo as he started tugging on it. I had a quick flash of it just pulling right on off. Good to know I don't have to dig out the extension from under the bench seat unless I have to.

Dave and I pulled the doghouse today to have a look at the engine so we can start working on whatever the issue is with the overheating. His neighbor came over and suggested that perhaps my lower hose is collapsing on itself from suction. We let the van heat up yesterday and even took it for a drive and the stupid thing wouldn't overheat (of course) but Dave said neither the upper or lower hose seemed to have any fluid in them which is apparently wrong. I'm just glad I don't seem to need a new radiator.

I ordered a new EGR valve and still need to get a new EGR gasket as well as a donut gasket since there seems to be an exhaust leak between the manifold and the front exhaust pipe. Unfortunately Dave also thinks my head gasket is leaking. This doesn't please me since all I've ever heard about head gaskets has been bad news.

In other news 4 of the cats are in Dave's house since we're here for the summer (at least). His little kitty Basil seems to be enjoying the company and my cats are pretty well-traveled so they are at home and pretty comfy anywhere ... as demonstrated by Dandy who has made a chair and this deacon bench his favorite hang out spots.
The girls who aren't as comfortable in new situations are still in the van and probably enjoying the fact that the boys aren't around.

And just because I was impressed by how the picture turned out since I tend to take shaky blurry pics when using digital zoom ... this Banded Pennant dragonfly hung out with me the other day. It was very attached to this spot on the steps since if I got too close it would fly off do a lap around the yard and come right back. I love dragonflies! They are so elegant and graceful, yet creepy. 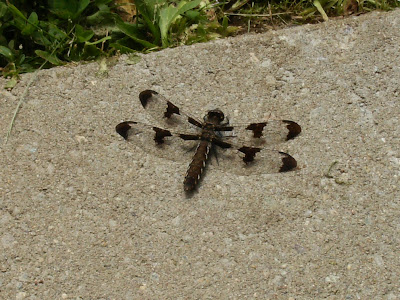 You can see a larger version of this picture on my facebook page here. Unfortunately, if I post larger pics to my blog it makes the layout look funky.