All Mondo & Titanic flutters have been marked down by 50% to make way for new cocoons!
Posted by: Cherry at September 22, 2017 No comments:

First Autumn for me. While I know this can also be the celebration of the second harvest (maybe I get a third harvest then?) this is my first Autumn. With the Maryland Renaissance Faire continuing I get to celebrate the changing of the season and all of it's colorful glory here in MD. Then, just as the weather turns to nippy, I bolt from MD and take up residence in Louisiana where there will hopefully still be plenty more days of warmth before it turns to nippy there as well.

The Louisiana Renaissance Faire can be tricky for a traveler as far as climate. It can be sweltering humidity in November or a cold humidity that chills your bones. In either case Autumn is extended for a period and since it's my favorite time of year that is okay by me.

I'll be in MD for just about another 5 weeks so if we need to touch base, we should do that.

- I have a fun idea for a little polymer clay project that I'm hoping is received well enough that folks will want to take one home. I'm taking my time and figuring out the costs and what the cost of the final project will be. I've done a lot of searching and find things close to what I want to do but not exactly so I have that going for me. In the meantime I'm watching tons of tutorials regarding painting and coloring of polymer clay because I'm not a paint-gifted person. I'm not sure I'm even artistically inclined. I'm creative but artistic? Nah.

- Dot went for an unauthorized outdoor adventure this week. Last Sunday she decided bolting out of the RV door was a terrific idea. Once out there she looked around like she had gone through some sort of mystical rabbit hole to a new universe and promptly ran scared for the neighbors shed and brush where she spent nearly two nights before deciding the van was a better option. She's fine but I really wish she would stop doing this. She's clearly not happy once she actually gets outside. She's also not usually one to bolt out of a door unless it didn't latch properly and no one is around so I'm not sure why she went this time.

- The rest of the cats are doing fine. Baron Mortipurr von Fuzzybritches has settled in quite nicely. He is an old soul I think. Calm & relaxed he is simply adorable with his flat little face. I don't think he's going to get much bigger so definitely small than I was expecting him to be. Maybe some of that had to do with how sickly he was when I first got him. Who knows - I love him.
Not much else is going on. Hopefully I'll have pictures of the polymer project soon.
Posted by: Cherry at September 22, 2017 No comments: 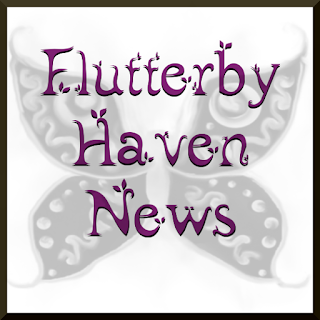 Just testing adding news from Flutterby Haven to my page.
Posted by: Cherry at September 01, 2017 No comments: